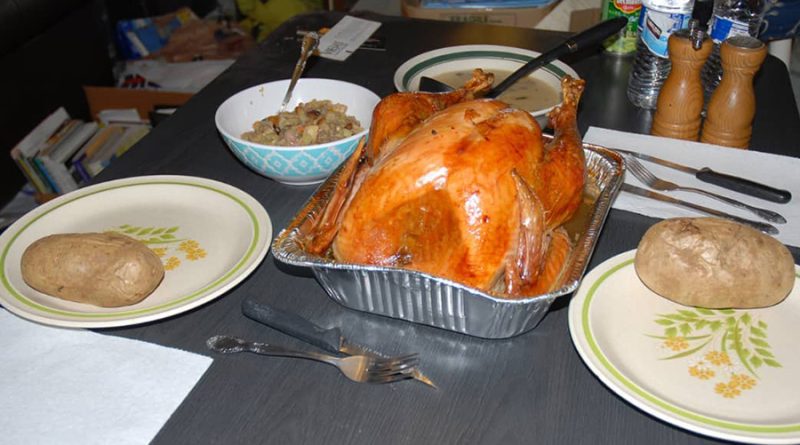 Once again someone asked me how I’m doing. The immediate answer was the usual, “I’m doing okay.” The reality is of course I am in physical pain and I’m not satisfied with my life. Yeah, I’m doing okay, but it feels like life could be a lot better. It wouldn’t take much looking to find things and people that give me gratitude, but to be honest, I just don’t feel like it.

When it comes to this holiday, I have residual feelings of apartness that developed during my days in the Marine Corps, and that was over 40 years ago. I just see the world differently today. Why wait until this one day to express gratitude for our family, friends and situation? And what about the indigenous people who were incredibly harmed by the European invasion that not only caused a genocide, but has now fouled the land, air and water to such an extent we are in a climate crisis.

My idea of an enjoyable Thanksgiving: eating some homemade stuffing that has pork sausage and apple bits in it. No nuts of any kind. And then sleeping in front of the TV through all three football games.

“Normal” Thanksgivings? There’s always too much turkey left over, the green bean dish often tastes strange — why not green beans straight, without any of that extra stuff in and on them? Actually, there’s nothing wrong with the “traditional” Thanksgiving dinner. Other than it’s too fattening and we generally eat too much of that fattening fare. Usually, I enjoy sitting and talking with family or friends, but after a while, sooner rather than later, it’s time to go. Do you really want to spend the day, or even an entire afternoon or evening with family? Not every holiday, every year.

Recently I spent a week with family in Texas to celebrate our family. It was great, I had a good time, but it was nice to be home once again. Same last Christmas. It was nice to spend it with family, but what a nice feeling to be home. In fact, the reason I was in Texas celebrating the holiday was a desire to spend it with family, something I hadn’t done in years. Even though I don’t share their religious beliefs for the holiday I enjoyed the time very much. In a nutshell I wanted fellowship with loved ones, without any expectations.

This year is different. If I had the chance to fly somewhere for this holiday or the next, I might consider it. But right now, not much interest in that fellowship. In fact if I could I would fly to Hawai’i  and get in some snorkeling and maybe film/photograph big wave surfing at the Pipeline or Jaws.

Many years later I learned of the Native American National Day of Mourning. Since 1970 the United American Indians of New England have held a day of mourning and remembrance at Cole’s Hill, which overlooks Plymouth Rock, in Plymouth, Massachusetts. The Native American sentiment over the day is so ingrained in the town’s history and tradition the town of Plymouth erected a monument that has a plaque that reads:

“Since 1970, Native Americans have gathered at noon on Cole’s Hill in Plymouth to commemorate a National Day of Mourning on the U.S. Thanksgiving holiday. Many Native Americans do not celebrate the arrival of the Pilgrims and other European settlers. To them, Thanksgiving Day is a reminder of the genocide of millions of their people, the theft of their lands, and the relentless assault on their cultures. Participants in National Day of Mourning honor Native ancestors and the struggles of Native peoples to survive today. It is a day of remembrance and spiritual connection as well as a protest of the racism and oppression which Native Americans continue to experience.

There’s another observance, UnThanksgiving Day, held on Alcatraz Island in San Francisco Bay. At the time of this publication the event has been going on for several hours. It starts at sunrise and continues for several hours. Both events are open to anyone, but speakers are limited to Native Americans.

Both are alternatives to Thanksgiving, but theoretically one could attend one of these ceremonies and then join the family at Thanksgiving dinner. Imagine that conversation:
“Hey Naomi. What have you and Bob been doing today”
“My name is Robert —”
“Well Mom, Robert and I went to Alcatraz for the UnThanksgiving ceremony at sunrise. It was very informative. Did you know that with colonization, especially after the Gold Rush, the Ohlone people were nearly wiped out by government sanctioned ethnic cleansing of the area?”
“What are you talking about? Here, pass the cranberry sauce to your father. Your sister made it.”

Thanksgiving is a part of American culture and is unlikely to be displaced by meaningful, accurate educational ceremonies. More people might actually talk about the destruction of the native cultures while passing the mashed potatoes and gravy and that would be a change for the better.

The holiday for most people though will be about family and friends gathering together in gratitude for one another. We joke about the arguments and inappropriate behavior, mainly because it is so common among many family gatherings. It will be especially testy this year as the presidential campaigns are now in full swing and political views will be flying across the table as the stuffing gets passed from one hungry person to another.
“Effin’ Trump.”
“Effin’ Buttegieg.”
“The media is biased against candidates of color —”
“F’em all. We need another Nixon.”

Maybe they’ll talk about the impeachment hearings:
“It’s a hoax, it’s all fake, like the news —”
“I can assure you Uncle Ernie, the hearings are very real and the news has it right —”
“You people just can’t get over the 2016 election. I want more turkey.”
“Save room for the pie, Ernie.”

I want olives for Thanksgiving. Traditional pitted black olives and Manzanilla stuffed with pimiento. And my special version of stuffing that has pork sausage and apple bits in it. If we’re going to over eat a very fattening meal, we might as well go all out. As for the 2020 elections, I’m not really interested in the presidential campaigns just yet. Wait until Super Tuesday when California gets to vote in the primaries.

Many people in California are spending this Thanksgiving rebuilding after the devastating fires that have been ripping through the state for the past decade. As of this writing the Cave Fire in Santa Barbara County is mostly out, thanks to the rains that crossed the state on Wednesday. There are some small pockets that are still burning, but according to Santa Barbara County fire spokesman Mike Eliason, “…for the most part the fire is pretty well taken care of and pretty well put to bed.”

That’s good news. Maybe we can be spared anymore fires for the rest of the holiday season. Of course if we get heavy rains we’ll have to be ready for debris flows from the newly burned areas, but let’s just be thankful the rain doused the fires. And this just in from the National Weather Service: If you’re out on the ocean off the coast of Southern California you are in for some heavy seas.

That is something Californians can really be thankful for on this Thanksgiving, whether you spend it with a crowd or alone.

Enjoy the day and be thankful — or not — spend it as you wish — or not — and remember there is always something that can fill us with gratitude. Just the fact that I am still breathing at my age — wow. Every day is a new milestone in my immediate family. I don’t take it lightly and today gives me extra reason to be thankful.

Now, if you don’t mind, I’m gonna watch some football. Effin’ Packers … how could they lose so badly to the Niners?

Top photo is a YouTube screenshot of Richard Sanders as Les Nessman, from the
Turkey Drop on “WKRP in Cincinnati,” one of the classic episodes from a classic TV sitcom

Letters to Jim: Just put the beer over there