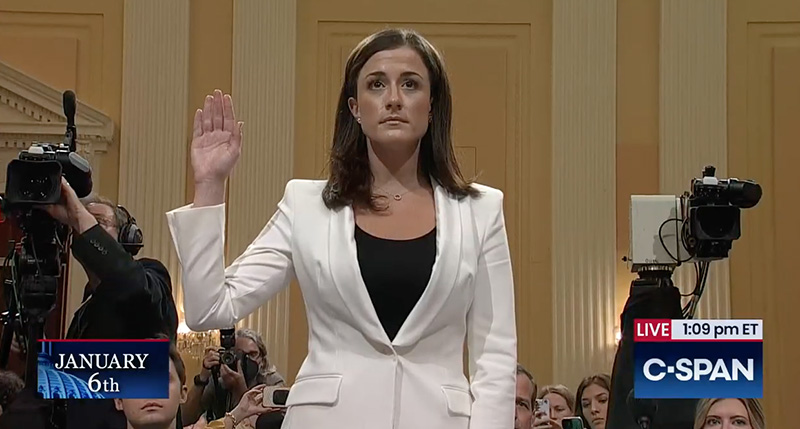 She was — is — the ultimate witness for the prosecution, or in this case, the House Select Committee on the January 6 Insurrection, Cassidy Hutchinson. She wasn’t looking for any immunity or special favor, Hutchinson appears to be that rare figure who puts service to one’s nation over party and personality cults and wanted to expose how the Big Lie had climaxed on January 6, 2021 when rioters became insurrectionists as they invaded the capitol and did extensive damage to the building.

Several news organizations have “key takeaways” from her testimony, but one thing I found to be a key takeaway: Hutchinson wanted to tell the nation about all the good things the Trump Administration had done for the U.S.A. My thought was, “Like what?”

Obviously, Cassidy Hutchinson is not a flaming liberal … or even a centrist Republican. She was on the Trump Train until the former president and some of his co-conspirators decided to break some laws in an attempt at holding on to power.

According to Hutchinson, both her boss White House Chief of Staff Mark Meadows and former President Trump knew, before the rally started at the White House Ellipse on January 6, 2021, that some of the members of the rally were armed with “knives, spears and guns,” but the former guy yelled at the secret service to take away the metal detectors that were used to screen for weapons. Hutchinson said Trump told his detail, ““I don’t fucking care if they have weapons. They’re not here to hurt me. Take the fucking mags away. Let my people in. They can march to the Capitol from here. Let the people in. Take the fucking mags away,”

“Mags” being magnetometers. I didn’t know what those things were called until Hutchinson gave her testimony.

Donald J. Trump knew many of his followers were armed with a variety of weapons before his rally got under way and he sent the mob to the Capitol to do his bidding. According to Hutchinson, on January 2, 2021 Chief-of-Staff Mark Meadows had met with Trump attorney and part-time side show attraction Rudy Giuliani and then told Hutchinson, “things might get real, real bad on January 6.”

Hutchinson said both Meadows and President Trump knew about the potential for violence well before January 6. In other words, the attack on the capitol was premeditated.

White House lawyers had warned against crazy talk that Trump requested to be added to his speech, things like, “Fight for me!” and We’re going to march to the capitol.”

That was in his speech.

Hutchinson said that White House Counsel Pat Cipollone told her Trump should not join his followers in their attack on our democracy. According to Hutchinson, the lawyer told her “We’re going to get charged with every crime imaginable if we make that movement happen.”

One of the contest points from Hutchinson’s testimony, which she gave under oath, was that when Trump learned his motorcade wasn’t going to the Capitol so Trump could join the other insurrectionists the former guy lunged at the steering wheel of “the Beast,” the radically tricked out GMC Suburban presidents drive around in and when his lead Secret Service agent Bobby Engel tried to restrain Trump the former president tried to choke Engel.

Hutchinson said she was told this by then deputy Chief of Staff Tony Ornato, who is also a senior Secret Service agent in the White House with Bobby Engel sitting next to him.

The Secret Service said it was cooperating with the Committee and would continue to do so, including by “responding on the record ” to Hutchinson’s testimony.

The Secret Service said the claims of Trump trying to grab the wheel and choke an agent were not true, but they did admit Trump was “irate.”

For the longest time I assumed Trump was showing his true, cowardly self by not joining his followers as they trashed the Capitol. But the truth is cooler heads prevailed. Even the Secret Service Agents who were in Trump’s pocket didn’t want any part of trying to protect a nut bar as he tried to mingle with thousands of his nut bar followers.

Interesting thing to note: As far as know none of the speakers on that rally stage went up to the Capitol with their fellow insurrectionists. Maybe they all knew, as Pat Cipollone knew, they would be facing a multitude of felonies if they did.

Of course Meadows and Giuliani deny asking Trump for pardons concerning the insurrection. Other loyal Trumpers, who know Hutchinson, like former Chief of Staff Mick Mulvaney, defended Hutchinson. “This is explosive stuff. If Cassidy is making this up, they will need to say that. If she isn’t they will have to corroborate. I know her. I don’t think she is lying.”

Trump of course has to denounce and insult Hutchinson in that special way that makes his denunciation a badge of honor. He calls her a “Third rate social climber.”

Hutchinson was hardly third rate, or, as Fox News host Jesse Watters described her: a “low-level junior staffer.”  Oh darn Jesse, you are mistaken. She was a senior advisor to the former president and his chief of staff, Mark Meadows. Her office was between the Oval Office and that of Chief of Staff Mark Meadows. If his lips are moving Watters is lying. The TV clown compared Hutchinson’s appearance before the committee to action movies, and the old TV show, The West Wing. Hard to imagine the West Wing ever being an action series. Watters also compared the hearing to the old TV show, 24.  Now, it can be cerebral like the West Wing, or it can be an action-packed fantasy like 24, but it can’t be both. Really, Jesse Watters is a clown.

Watters wasn’t the only Fox host to say something stupid. Laura Ingraham said of Hutchinson, “It was like she was auditioning for a seat at ‘The View’ or ‘The Real Staffers of Pennsylvania Avenue,’ It just seemed like an audition tape.”

Late night NBC host, comedian Seth Myers pointed out the irony of Ingraham’s comments. Myers said, “You voted for a literal reality show host for president! Did you dipshits just memory-hole the fact that before he was president, Trump spent most of his time in a fake boardroom yelling at Gene Simmons and Lisa Rinna over there flailing hotdog business? It was his last job before president!”

You can watch the entire clip here.

And then I heard, on the Damage Report, the most compelling debunking of Trump reaching for the steering wheel and a big bad Secret Service agent: Trump’s hands are too small.

Cassidy Hutchinson’s testimony under oath in front of the House select Committee on January 6 is just one bit of news in the past 10 days. The U.S. Supreme Court has sent the nation back over 50 years with their decisions. As reported by CNN: “The Supreme Court curbed the Environmental Protection Agency’s ability to broadly regulate carbon emissions from existing power plants, a major defeat for the Biden administration’s attempts to slash emissions at a moment when scientists are sounding alarms about the accelerating pace of global warming.⁠”

We need to take more control over the federal, state and local governments in this nation. The so-called conservatives will kill us all with their policies.

Congratulations to Associate Justice Ketanji Brown Jackson as she became the first African American woman to service on the U.S. Supreme Court.