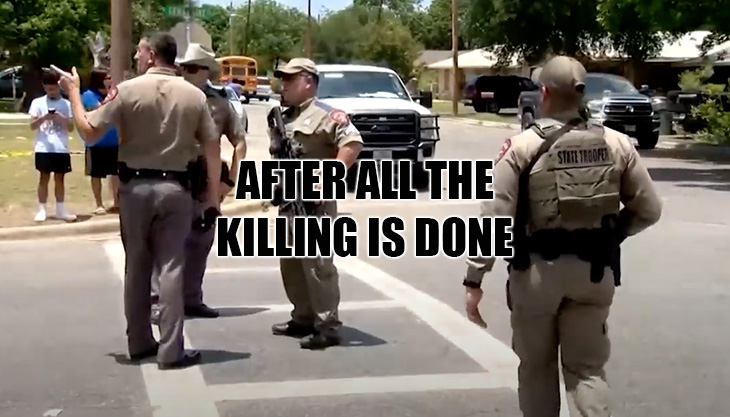 The former White House Press Secretary, Sarah Huckabee Sanders, actually said this: “We will make sure that when a kid is in the womb, they’re as safe as they are in a classroom.” Huckabee Sanders didn’t say this some years ago, it was recently after she won her party’s nomination to be the next governor of Arkansas.

What an idiot. Roughly three weeks after 19 elementary-age children were murdered in their classroom. “We will make sure that when a kid is in the womb, they’re as safe as they are in a classroom.”

The Uvalde and Texas authorities who have control of the crime scene photos and video should release all that evidence to the media so it can be seen by the public. Show we Americans what young, cute little elementary-age children look like after a gunman with an assault weapon is through spraying bullets their way. Of course the authorities in Texas don’t want to release any of that photographic evidence to the public. It would turn a large group of voters completely against the easy access to weapons of war.

Texas Governor Abbott and his cohorts in state and local government have been slow-walking evidence that would — will — show exactly what happened and when, from the moment the gunman crashed his pickup truck, then stepped out of his vehicle and proceeded to the doors of Robb Elementary School, where he entered and then what the killer was doing during the hour-plus officers from several area law enforcement agencies stood around in the hallway just outside the door that separated them, all 19 of them, from the lone gunmen.

We know there were children with cell phones calling 9-1-1 begging for help while those law enforcement officers were standing out in the hallway.

It makes me think about the number of law enforcement officers who gave their lives doing what they were required to do in active shooter situations: rushing at the shooter, drawing his (or their) attention and gunfire away from potential victims to themselves as they try to take the life, or lives, from other human beings.

Most police officers never use their firearms in their years, decades even, of service in uniform. If they do pull out their weapons and fire them in the direction of a shooter, it’s the most hyper, adrenalin-filled moments of the officers life. And sometimes they pay with their lives.

But not for Chief Pete Arredondo and most of his armed comrades that stood around outside the schoolroom where the gunman was murdering children and two adults. Except the police officer who tried to get into the room to save his wife and hopefully some of the children. His fellow law enforcement officers couldn’t charge into that classroom, but they could restrain officer Ruben Ruiz, take his sidearm away and escort him away from the school … after his wife, Eva Mireles, called him to say she had been shot by the gunman and the killer wasn’t done with his bloody assault.

Hopefully you live in an area where the law enforcement officers do their jobs in active shooter situations. Or, maybe we should all buy firearms. I suggest semi-automatic weapons like one of the Glock 9’s or a .45 automatic. Take some shooting and firearms safety classes as well.

The glitch in that plan is, if you are ever in an active shooter situation and you pull out your shiny new weapon, any law enforcement officers on the scene might mistake you for the active shooter. It’s happened, last summer in Arvada, Colorado. The only thing that stops a bad guy with a gun, is a good guy with a gun … unless law enforcement good guys with guns mistake the actual good guy for an actual bad guy and kill him.

Damn, it’s a lot more complicated than Wayne LaPierre makes it sound. Maybe the police should just do their jobs … and someone should tell Sarah Huckabee Sanders just how unsafe children are in the classrooms.

Protesting and the coronavirus continue and infections start to spike again