Sarah is an international news photographer nearly killed while on a recent assignment in a hot war zone. Beaten and bruised she is still alive and very happy to be back home with James her longtime boyfriend and international journalist who often travels with Sarah.

James is not hurt — not this time — and he is dedicated to helping Sarah fully recover. Their publisher is Richard, a man on the door step of senior status, but he has a new girlfriend. Her name is Mandy and she is a perfect blonde bimbo stereotype: smoking hot and very beautiful blonde woman with hints of intellectual short falls and about half the age of Richard. Sarah is portrayed by Nicole Pacent, James by Jamie Zwick, Richard by Paul Urcioli and Mandy by Kelly Fischer and each offer five star performances.

Sarah is sharp tongued and clearly quick witted, James is bright and he clearly loves Sarah. Richard is clearly a bit of a playboy type and Mandy is classic blonde bimbo but none of the characterizations are without opportunities for modifications.

Mandy for example does show signs of some potential brilliance and there are reasons to believe that Richard just might not be the wheeler dealer he seems to be. James clearly loves Sarah but his proposal of marriage is, at first declined.  Their six years together have been wonderful but not perfect and some past issues need to be resolved if their future as man and wife is to be a success. 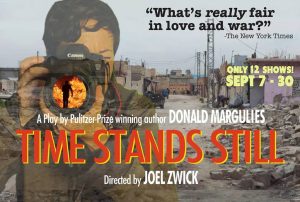 What makes this show so much fun is the character development and the interrelationships between the four characters. By intermission the audiences is left with more questions than answers. Will James and Sarah marry or even remain together? Will Richard stay with Mandy or will Mandy remain with Richard and if so what will their relationship become?

Richard did suggest that Sarah and James write a book together and he Richard would get it produced and published. Will that actually happen and if so what challenges will be met along the way?  But the powerful dynamic throughout the journey is the steady character development often filled with humor.

Time Stands Still is written by Pulitzer Prize-winning playwright Donald Margulies and directed by Joel Zwick. This production is at the Lounge Theatres, 6201 Santa Monica Blvd, Hollywood, CA 90038. Time Stands Still runs through September 30. Shows are at 8 p.m. except Sundays, which are 3 p.m. Tickets can be purchased here.