Just try and imagine this. An 18-year-old Marine Private gets free tickets to and a free executive airplane ride to and from the 1964 Olympic Games in Tokyo Japan, goes out partying with super movie star William Holden in Hong Kong, volunteers for duty in Vietnam and in his final couple days spends one afternoon drinking beer and sharing a female companion with North Vietnamese soldiers. These are some of the unbelievable but totally true adventures revealed for the first time in Ron Irwin’s 19th published book 51-50 The Book.

Ron chose the title “51-50” because it is the police code for crazy and it quickly becomes obvious that most of his adventures revealed for the first time ever after 50 years many of capers are indeed wildly insane but also mostly hilarious. 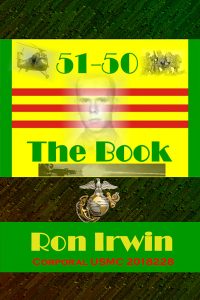 Ron’s inspiration for writing this book came from his visit to the Miramar Air Show in San Diego, California in September 2017. He along with a couple hundred or so other veterans of the Vietnam War were awarded a commemorative pin honoring their service.

That was very moving but after the ceremony Ron saw something that totally blew him away and almost instantly rekindled powerful memories long ago buried in his mind. What he saw was an A-4 Skyhawk jet that had been with the Marine squadron VMA-223 in Chu Lai, Vietnam 50 years previously. It was not a plane like the plane it was the plane and Ron was shaken.

What came from that moment is this new book in which Ron makes no claim of being a hero. He was a survivor nothing more. And upon calm more mature reflection it became clear to him that he had indeed been rather insane. That said his Vietnam experience and other events leading up to his voluntary service in Vietnam were rich in often dark humor.

It is also Ron’s personal salute to the approximately 2.7 million American men and women who served in the Vietnam War. It’s personal, it’s real, it will make you laugh and maybe even cry but it is a great read and only $7.98 with 10% of the net proceeds going to Vietnam Veterans of America.

Copies may be ordered HERE.

David Hamilton attended Northwestern University and his a freelance writer who has written article, scripts and short stories for a variety of publications, including Time Magazine, National Journal, the South China Morning Post and others. He now resides in the Los Angeles area.

An enigma wrapped in a mystery

Life is terrifying at times