LOS ANGELES – The Los Angeles Rams have announced they will begin their training camp at the University of California, Irvine, at Crawford Field. This brings NFL football back to Orange County for the first time in more than two decades.

A total of 16 practices at UCI will be open to the public, as well as a scrimmage  at the Los Angeles Memorial Coliseum on Saturday, August 6 at 3 p.m.

Rams head coach Jeff Fisher said, “We look forward to training at UCI in preparation for the 2016 season. Their facilities are top-notch and we’re excited to welcome our fans to their campus and also to the Coliseum as we gear up for the start of the season.”

The open practices are free to the public and the Rams’ first public practice will kick off on Saturday, July 30 starting at 3:30 p.m. Gates open 90 minutes prior to the start of practice and select players will sign autographs after all open practices.

Fans can park in the Mesa Parking Structure (next to the Bren Events Center) at $10 per car and are encouraged to purchase parking passes online in advance at www.TheRams.com. Video cameras and alcohol are prohibited.

As an added bonus fans can watch the filming of the 11th season of the HBO sports show, Hard Knocks. The sports-based reality show is presented by the Los Angeles Rams, HBO Sports®, and NFL Films. There will be five episodes that begin airing on Tuesday, Aug. 9 (10 p.m. – 11 p.m. ET/PT) exclusively on HBO.

Below is a complete schedule of practices open to the public. For additional information click  on the team’s website at www.TheRams.com. Weather and field conditions are evaluated daily, so all dates and times provided are subject to change, including autograph sessions. Entries in red indicate a different starting time from the usual 3:30 p.m. start. 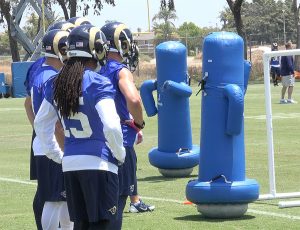 Get intro training to follow the Los Angeles Rams once the season gets under way, September 12 when the Rams travel to Levi’s Stadium in Santa Clara to play the San Francisco 49ers. The Rams first home game will be September 18 at the Los Angeles Memorial Coliseum against the Seattle Seahawks.

Week 16 in the NFL: It ended tricky