Okay so you may have heard about the ill-fated love between the 16 year old boy, Romeo Montague and a 13 year old Juliet Capulet both from Verona, Italy and both families very much despising the other. That classic tale of ill-fated love came to life around 1594 when first penned by William Shakespeare and has for centuries mesmerized theatre audiences around the world. But it has now taken on a whole new level in the contemporary version currently on stage at the Lonny Chapman Theatre in North Hollywood.

You see The Group Rep at the Lonny Chapmen Theatre has shifted the venue from 16th century Italy to Germany in the 1930’s during the rise of Adolf Hitler and the Nazi party. In this version Romeo is an Aryan Nazi while Juliet is a Jewish girl. The love they share is rich and true and powerful but under the circumstances of their time it is also utterly impossible. Is there any slim possibility of a happy ending?  Well that would be against both history and a true appreciation of the circumstances of their time.

What makes this show so captivating is its powerful presentation of the horrors of Nazi Germany and how so many people were so deeply and tragically damaged and even killed. Watching the show I felt particularly moved because only a few months before I had the distinct pleasure of visiting Germany and found that overwhelmingly the people I met there to be truly warm and friendly and open. And then I also recalled that many years ago now I visited Ho Chi Minh City (aka Saigon) in Vietnam and found a similar level of pleasantness amongst the Vietnamese people I met, including some who were in their military service, a service that not that many years before I had engaged in mortal combat.

What does that have to do with Romeo and Juliet? In one sense nothing but in another sense everything because one powerful message to emerge from this play is how it is possible for otherwise very nice people to be brought into doing horrible things when subjected to failed leadership. Would there have ever been a World War II and six million Jewish people slaughtered without an Adolf Hitler? Would there have ever been a two-decade long war in Vietnam with more than 3 million Vietnamese slaughtered without a Lyndon Baines Johnson? 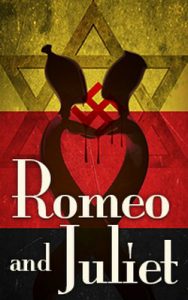 I apologize for this seeming diversion but this current version of Romeo and Juliet goes well beyond entertainment as it inspires deep thought that reaches far beyond the tragic love affair between two teenagers. In no way do I mean to minimize the rich entertainment value of the show for that element is also present in pleasant abundance.

In the literally thousands of theatrical presentations I have been privileged to watch and review this version comes as close to a “must see” show as any show I can remember because it is both deeply entertaining and concurrently powerfully thought provoking.

My unrestricted kudos to the Group Rep and the entire cast and crew for producing a true theatrical masterpiece. The show runs now through October 14, 2018 at the Lonny Chapman Theatre, 10900 Burbank Boulevard, North Hollywood, California. Show times are Thursday, Friday and Saturday evenings at 8:00 p.m. and Sundays at 2 p.m.  Reservations and ticketing available by calling 818-763-5990.

‘Lost in Yonkers’ powerful and hilarious