The State of California, through Cal Fire, has issued an update for the Valley Fire that is sweeping through Lake and Napa Counties.

Over 100 structures have been lost in the fire and there are mandatory evacuations throughout both counties, primarily in Lake County:

Advisory evacuations have been issued for these areas:

According to authorities the fire is spreading faster than they’ve ever seen before, due mainly to the high winds and the dry vegetation that has been baked in a drought for at least four years. Due to the smoke and unpredictable winds agencies have not been able to deploy air assets to some areas to investigate just how quickly the fire is moving and how much damage it has already caused.

They are fighting the fire aggressively, but as of Sunday the fire was moving and growing faster than the firefighters could match. The terrain is mostly rural, with very steep hills and valleys, which hampers the firefighters’ ability to get to the fires and the deep canyons and valleys serve as tunnels for the fires, allowing them to move at a much faster pace.

The National Guard has joined the fight and, as Cal Fire puts it on its website: “Many local fire departments.”

They Valley Fire has grown so much and so quickly, Cal Fire has pulled assets from other fires to battle the this fire, which one official said was the agency’s number one priority.

Several firefighters have been injured and one person has died as a result of the fire.

The National Interagency Fire Center says there are 37 active “large” fires in the West, seven of them in California. The center considers California to be the “number one priority.” There actually a dozen fires burning in our state.

The cause of the Valley Fire is still under investigation.

For more information on the Valley Fire — and fires that might be in your area — you can keep up to date with Cal Fire on their website.

Our previous article on the fire. 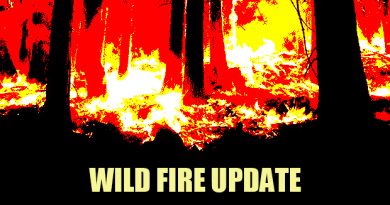 Fire in hills above Burbank

Wildfire breaks out near The Getty